I hope you like what you see on my website and that you may be tempted to buy some photos for your own collection. This is easily achieved by visiting the various Photo Galleries and using the shop facility.

Proceeds from sales help towards the purchase of the specialist archive storage materials to ensure that the Photostox archive is sustained for the future. Please note that some of the early scanning that I did was at a relatively low resolution so some photos will only be okay as 6 x 4 or 5 x7 size prints. The website will tell you if the image is not capable of being produced at a larger size. If this is the case contact me and I will load a higher resolution image of the relevant photo which should solve the problem.

Now a little bit of background to how Photostox came into existence. My first visit to a stock car meeting was in 1974 when I visited my home town track at Blackbird Road in Leicester. I had always been interested in photography so it is not surprising that I was soon taking photos of the cars and the racing. My first stock car photo was of Jim Potter at Leicester on 28th June 1975 and I retired from the centre green at the end of the 2017 season. I started selling photos at tracks in the mid-1980s and Photostox was established in 1988. The Photostox photo archive now stands at well over 250,000 images.

For many years stock car fans urged me to create a website of my images. I managed to achieve that in 2011 but with having a very busy job the plans for regular updates went somewhat out of the window. I took early retirement in 2017 but as a lot of new retirees find out I am still exceptionally busy and never seem to have any spare time available!

For the website I initially loaded five galleries and the first was a quick rumble through, at that time, my 36-years of stock car photography, with one picture per year. The next two galleries are of my two favourite stock car drivers – firstly Dave Chisholm (252) and then John Lund (53). The fourth gallery is the first set of photos that I took, at Leicester in 1975, whilst the fifth gallery is of the shots that I took at my first visit to my favourite track, Coventry, also in 1975. I have added a few more galleries since but there is plenty more to go at and I am determined to load more photos on to the site on a more regular basis.

The photos you see are either shots I have taken myself, collections that I have purchased over the years with copyright or photos that I have scanned with the original photographer’s permission. I have no intention of infringing other photographer’s copyright so if you see any image in a gallery that you don’t think meets these three criteria then please do get in touch by using the contact link or by emailing me at [email protected]

Photostox was formed in 1988 in order to make the Brisca F1 stock car photos that I was taking available to fans. The product range was developed to include key rings, badges, children's colouring books and clothing. The Photostox trailer, with my wife Linda behind the counter, became a very popular attraction at various UK tracks through the 1990s and early 2000s. We also made regular trips to the tracks at Baarlo and Venray in the Netherlands.

I have had UK stock car photos published in numerous magazines in the UK, The Netherlands, USA and New Zealand. 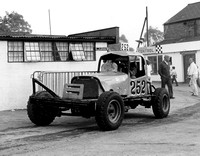